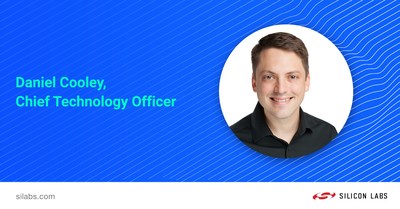 Since 2005, Cooley has served in a variety of engineering and business leadership positions at Silicon Labs in the US, Asia and Europe. As CTO, Cooley is responsible for the company's overall research and development strategy and execution, and he will work closely with Silicon Labs president Matt Johnson on IoT market opportunities, strategic partnerships and acquisitions and advanced technologies at the edge.

"As we focus our innovation efforts on building the world's most secure, intelligent hardware and software platform for IoT development, Daniel Cooley is an ideal choice to lead the company's R&D efforts," said Silicon Labs CEO Tyson Tuttle. "For more than 15 years, Daniel has focused on wireless technology – from developing patents, to leading our IoT business and driving corporate strategy. His deep understanding of our markets, customers, ecosystems, technology and solutions will accelerate our IoT leadership and growth."

"Embedded computing is in the middle of a multi-decade transition from offline to online that will have global impact on our lives and the economy. Industry estimates indicate that there will be >50 IoT devices per person leveraging at least 10 different wireless protocols," said Cooley, "and we will continue delivering the breakthrough innovations in compute, connectivity, security and machine learning necessary to address this large, diverse and growing market."

Alessandro Piovaccari, who has served as chief technology officer since 2015, will transition to Silicon Labs' Technical Advisory Board.

"I would also like to express my thanks and gratitude to Alessandro Piovaccari for 18 outstanding years of invaluable contributions to Silicon Labs," continued Tuttle. "Alessandro joined Silicon Labs in 2003 to design the company's single-chip FM radio products which have surpassed 1.7 billion device shipments. He went on to co-architect Silicon Labs' single-chip TV tuner IC, used by nine of the world's top ten TV makers, with more than 70 percent market share and 1.5 billion units shipped. As CTO, his technical and leadership contribution has been fundamental to building the current roadmap of IoT products and technology. Most recently, he focused on building a leading-edge R&D organization devoted to exploring ultra-low power technologies including advancing hardware and software architectures and bringing intelligence to IoT end-node devices. Alessandro is a true innovator. I'm grateful he will continue to serve as a technical advisor to the company."

Daniel Cooley joined Silicon Labs in 2005 and has served in various leadership roles throughout his tenure. He most recently served as chief strategy officer and was responsible for Silicon Labs' overall strategy, corporate development, M&A, emerging markets, and security. Cooley joined Silicon Labs as a chip design engineer developing broadcast products such as AM/FM radios and short-range wireless devices. He has a Master of Science degree in Electrical Engineering from Stanford University and a Bachelor of Science degree in Electrical Engineering from The University of Texas at Austin. He holds four patents in radio and low-power technology. Cooley currently serves on the board of directors for the Thinkery, Texas 4000, and the Texas Crew Foundation.

Alessandro Piovaccari joined Silicon Labs in 2003 as a senior design engineer and has served as the company's chief technology officer since 2015. He serves as a board member for the Skillpoint Alliance and the Open HW Group; a member of the advisory council of UTeach at The University of Texas at Austin, College of Natural Sciences; an advisor for the Center for Leadership Education, G. W. Whiting School at John's Hopkins University; and serves a member of the steering committee at the IEEE Custom Integrated Circuits Conference (CICC).